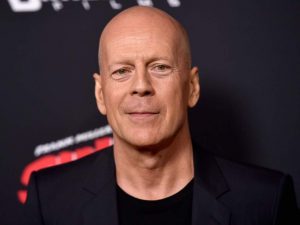 Bruce Willis is a top American superstar who is most renowned for his action-packed performance in thriller and action Hollywood movies.

Bruce Willis initially began acting in school plays to overcome his stuttering but later became besotted by the attention and after having landed several small roles on popular American TV shows in the late 1980s before getting his big break acting in Hollywood movies in 1987.

Bruce Willis has won several prestigious acting awards for his impressive acting skills and has had numerous award nominations to his credit as well.

Bruce Willis is regarded as one of the first and most popular true action stars in the Hollywood movie industry, with his role as New York cop James McClane being ranked as one of the most iconic characters in the American film industry. Besides being acting skills, Bruce Willis is also renowned for being an accomplished film producer and also as a singer who performs with his own band called “Bruce Willis and the Accelerators”. Apart from being an artist, Bruce Willis is also a successful businessman and owns several large houses and estates all over the country which also includes businesses such as a bar and a theater. Bruce Willis is easy to recognize for his shaven head, smirk-like grin and gravelly voice which he uses to portray unhappy and cynical characters on the screen mostly.

Thanks to his impressive acting career which spans for almost 30 years, as well as his entrepreneurship, Bruce Willis’ net worth is estimated around INR 1,251 crores (USD 180 Million).

Talking about his recognition as a talented actor, Bruce Willis has received numerous prestigious awards and has been nominated numerous times as well. Bruce Willis was awarded a Star on the Hollywood Walk of Fame in October of 2006 besides being awarded the prestigious Commander of the Order of Arts and Letters by the French Government in February of 2013.

The list of Bruce Willis’ award-wins include winning the Golden Globe Award for Best Performance by an Actor in a Television Series – Comedy or Musical for his popular role in the hit TV show ‘Moonlighting’ (1987) and having 3 Golden Globe Award nominations to his credit.

Bruce Willis was winner of the Awards Circuit Community Award for Best Cast Ensemble for his role in the cult-hit ‘Pulp Fiction’ (1994).

Bruce Willis is the winner of the Phoenix Film Critics Society Award for Best Ensemble Acting for ‘Moonrise Kingdom’ (2012).