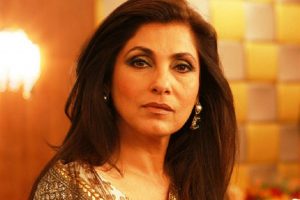 Dimple Kapadia is a popular Indian Hindi film actress who was most popular in the 1970s and 1980s.

Although she was stereotyped as a national sex symbol after having 2 Filmfare Awards, Dimple Kapadia ventured to break the title and starred in some of the most diverse and brilliant acting roles.

From mainstream Bollywood films to the parallel cinema industry, Dimple Kapadia is widely recognized as one of the top talented actresses.

Dimple Kapadia is renowned for playing some of the most challenging characters, just to spite the media and prove that apart from being a ‘sex symbol’ she also has excellent acting skills. Her various roles made Dimple Kapadia a popular choice in mainstream and independent Indian cinema industries, especially in the 1980s and 1990s.

Thanks to her over 30 years as a successful, award-winning actress in the Indian film industry, Dimple Kapadia’s net worth today is estimated to be around INR 72 crores (USD 10 Million).

Talking about her success as a talented actress, Dimple Kapadia has been awarded several times for her impressive acting skills, and also been nominated for numerous acting awards too.