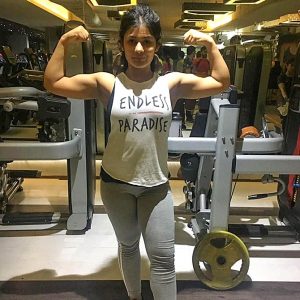 Geetika Sood is a popular young participant from MTV Roadies Xtreme 2018 with a huge fan following not only among male fans but she has also become an inspiration to tens of thousands of girls and women all across the country.

Geetika Sood rose to fame when she was selected as one of the participants in the popular ‘MTV Roadies Xtreme’ (2018) reality adventure series on Indian television networks.

Geetika Sood was reportedly a victim of verbal and physical bullying due to her being overweight as a teenager however she overcame the bullying by devoting herself to a strenuous workout schedule and today Geetika Sood is a successful fitness trainer and model as well.

Geetika Sood is not only popular for being one of the top favorite participants in the MTV Roadies Xtreme 2018 TV reality show but is also a fitness model at such a young age. Having suffered bullying and body shaming due to her excessive weight as a teenager Geetika Sood was determined to lose weight and her decision prompted her to get back in shape and become an inspiration for thousands of other girls across the country to become fit.