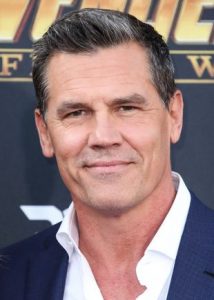 Josh Brolin is a talented and popular actor from the Hollywood movie industry.

Josh Brolin initially began acting in small role on TV and started his Hollywood acting career in an iconic movie in 1985, and has since appeared in several memorable role, in movies and on American TV as well.

Besides being a popular actor, Josh Brolin is also an accomplished writer and producer as well, having produced and performed in a documentary he wrote in 2009. Josh Brolin directed the short-film titled ‘X’ (2010) which was selected as the opening film at the Union City International Film Festival, held in December of 2010.

Josh Brolin has won several renowned awards for numerous of his roles in Hollywood movies and on American TV and has been nominated numerous times for prestigious awards as well.

Josh Brolin is considered to be one of the most talented actors in the American movie industry, and showcases his familial skills in acting with critically-acclaimed and award-winning roles in various super hit Hollywood movies till date.

Thanks to his immense success as an actor in the Hollywood movie industry for over 30 years, Josh Brolin’s net worth is estimated around INR 246 crores (USD 35 Million).

Talking about his recognition as a talented actor on the big screen, Josh Brolin has won several renowned awards and has had numerous award nominations to his credit till date.

Josh Brolin has also won the Screen Actors Guild Award for Outstanding Performance by a Cast in a Motion Picture for ‘No Country for Old Men’ (2008), won the Western Heritage Award for Fictional Television Drama (Actor) for his excellent role in ‘The Young Riders’ (1993) and won the Western Heritage Award for Theatrical Motion Picture (Actor) for his impressive performance in ‘True Grit’ (2011).

Apart from having won these 11 awards, Josh Brolin has also had an impressive 50 award nominations to his credit in his career as well.