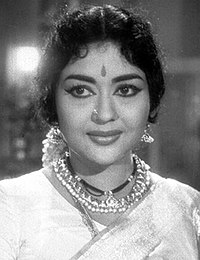 Krishna Kumari is an actress from India. She was born on 6th March 1933 at Naihati, West Bengal, India. She died on 24th January 2018 at Bangalore, Karnataka, India.

Krishna Kumari was married. Her husband’s name is Ajay Mohan Khaitan. Check out the table below to get complete information on Krishna Kumari.

Krishna Kumari has worked in many movies. Some of them are: