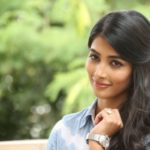 Pooja Hegde is a competitor of beauty, model and formerly beauty. She was awarded second place in the 2010 competition of the Miss Universe India.

In the Tamil Tamil Mugamoodi movie, Hegde made her acting debut in Mysskin (2012). She then appeared in Oka Laila Kosam and Mukunda (2014) in Telugu movies. In Ashutosh Gowariker’s Mohenjo Daro (2016), she also performed as female leader.