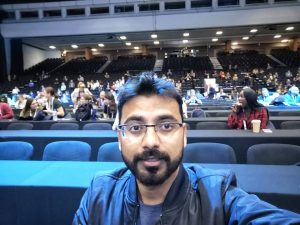 Harsh Agrawal is a popular young Indian blogger who is most renowned for his blogging site ‘ShoutMeLoud.com’.

Harsh Agrawal describes himself as an engineer by education but a blogger by profession. After having earned his degree in engineering Harsh Agrawal initially worked in a couple of renowned IT companies. However, Harsh Agrawal soon decided not to pursue the conventional career path of engineers and began learning how to become a blogger. Harsh Agrawal is popular for being the blogger to raise awareness about how blogging and SEO can actually become a source of income for writers.

Today, Harsh Agrawal has received worldwide recognition and has become part of the larger global community of bloggers who aim to provide knowledge of blogging and SEO to readers from all walks of life.

Harsh Agrawal is one of the most popular and successful young bloggers from India. Harsh Agrawal is the owner of www.ShoutMeLoud.com and other affiliate websites and blogs. Harsh Agrawal is an expert who motivates and guides others to earn considerable income through blogging. Harsh Agrawal has inspired tens of thousands of youngsters to quit their mundane 9-5 jobs and start their own blogging business. Harsh Agrawal has earned several popular blogging and social networking achievement awards, including the prestigious Best Indian Blogger Award for 2017 from the IndiBlogger community.

Thanks to his impressive blogging skills and popularity among users Harsh Agrawal’s net worth is estimated to be well over INR 25 lac (USD 32,400).

After completing his BE, Harsh Agrawal worked for a time with Convergys, while waiting for his appointment letter from Accenture. It was during this time that Harsh Agrawal began blogging and started to write about everything he had learned, including SEO,  social engineering, technology, hacking, etc. However, within only 5 months at his job Harsh Agrawal quit the job and began blogging full time once he realized he was making a considerable income doing what he loved.

At the end of December 2009, Harsh Agrawal traveled to Pune and met with teamed up with another popular blogger and both began their blogging enterprise. After having established a solid business model in place, Harsh Agrawal moved back to New Delhi in August of 2010. This allowed Harsh Agrawal to finally give his 100% to ShoutMeLoud and it has today become one of the most successful blogging guidance platform for millions of readers from all over India and the world.

Talking about the recognition and popularity that Harsh Agrawal enjoys, Harsh Agrawal’s award-wins include winning the IndiBlogger’s 2013 Best Indian Blogger Award and numerous other awards and accolades.