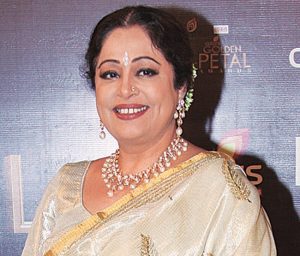 Kirron Kher is a renowned actress in the Indian film industry and the theater industry as well. Kirron Kher is popular for her supporting roles, usually as an important matriarch figure in Indian movies.

Kirron Kher is not only an award-winning actress but is also renowned for her numerous appearances on popular TV shows as a judge or as the host of talk shows.

Apart from being a talented actress Kirron Kher is also an active politician belonging to the Bhartiya Janta Party (BJP) on whose ticket she was elected to Lok Sabha (Lower House) of the Indian Parliament from Chandigarh, in 2014.

Kirron Kher is a truly talented actress and has appeared in several memorable side roles in numerous super hit and critically-acclaimed movies. Kirron Kher has showcased her excellent acting skills in different movie and TV genres, including drama and comedy.

Being a highly-talented actress on the big screen and on Indian television, Kirron Kher’s net worth today is expected to be around INR 32 crores (USD 4.3 Million).

Apart from these, Kirron Kher is also the winner of the Lux Style Award for Best Actress for her excellent role in the critically-acclaimed Punjabi/Urdu movie ‘Khamosh Pani’ (2004).