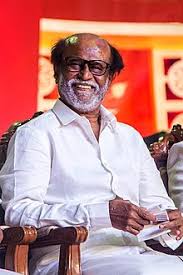 Rajinikanth is an actor and politician from Tamil Nadu, India. He was born on 12th December 1950 at Bengaluru, Karnataka, India. His father’s name is Ramoji Rao Gaekwad. He worked as a police constable. His mother’s name is Jijabai. She was a housewife. He has two elder brothers. Their names are Satyanarayana Rao and Nageshwara Rao. He has one sister. Her name is Aswath Balubhai.

Rajinikanth’s height is 5 feet 8 inches and his weight is 75 Kg. His net worth is Rs. 360 crores approximately as of 24th September 2018. His age is 71 years. He drinks alcohol but it is not known if he smokes.

Rajinikanth is famous for his style of tossing cigarette. He has a God-like stature in South India. Some of his popular movies are:

Rajinikanth has won many awards. Some of them are: