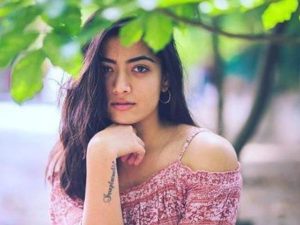 Rashmika Mandanna’s height is 5 feet 6 inches and her weight is 54 Kg. Her age is 24 years.

Rashmika Mandanna has worked in many movies. Some of them are:

This movie was released on 30-12-2016. This movie has a rating of 8.5/10 on IMDB. This movie was produced by G. S. Gupta, Rakshit Shetty, Pushkara Mallikarjunaiah and was directed by Rishab Shetty. The budget of this movie was Rs. 4 crores and it earned Rs. 50 crores in the Box Office.

This movie was released on 2-02-2018. This movie has a rating of 6.6/10 on IMDB. This movie was produced by Usha Mulpuri and was directed by Venky Kudumula. The budget for this movie was Rs. 3 crore and it earned Rs. 24 crore in the Box Office.