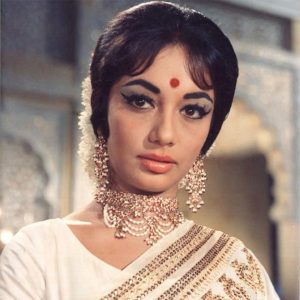 Sadhana remains one of the most popular yesteryear actress from the Bollywood film industry. Sadhana was regarded as one of the finest actresses in the Hindi film industry, in the 1960s and 1970s.

Apart from being a popular actress, Sadhana was also the highest-paid actress during this period. Sadhana is considered one of the stars who welcomed Bollywood’s “Golden Era” (1960s) with her graceful presence and impressive acting on-screen.

Till date, Sadhana is regarded as one of the most iconic actresses to have appeared on the Indian cinema.

Sadhana is still remembered as one of the most beautiful actresses to have graced the silver screen in the Hindi film industry. Although she was one of the most talented actresses of her times, Sadhana’s success remained largely commercial, with only a single award win.

Sadhana’s husband was popular filmmaker, R K Nayyar, whom she married in March of 1966, till his demise in 1995.

According to latest reports, at the time of her demise, Sadhana’s net worth was around INR 27 crores (USD 3.5 Million).

As she remained one of the most underrated actresses of her time, and was labeled basically as a ‘fashion icon’ Sadhana did not receive many prestigious awards.