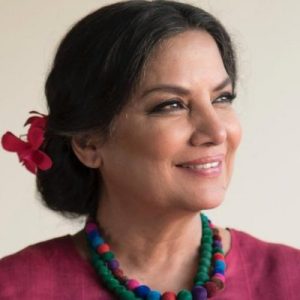 Shabana Azmi is an extremely talented and experienced actress from the Indian movie industry. Shabana Azmi is recognized for her versatile role in various movies in which she has given award-winning performances.

Shabana Azmi is not only a renowned film actress but is also a popular actress in the Indian theater and TV industry too.

Since after her debut in 1974, Shabana Azmi has been known as one of the best actresses in the Indian parallel cinema industry.

Shabana Azmi is one of the most talented and experienced actresses in the entire Indian film industry. Renowned for playing versatile and often hard-to-portray characters in movies, Shabana Azmi has established herself as the true queen of Indian parallel cinema today.

Thanks to her over 40 years career in the Indian cinema, Shabana Azmi’s net worth is estimated to be around INR 21 crores (USD 3 Million).

Shabana Azmi probably holds the record for the most-award winning actress in the history of the entire Hindi film industry. Apart from winning acting awards, Shabana Azmi has also received numerous honors and accolades from governments and others.

The other acting awards won by Shabana Azmi include winning the Taorima Arte Fetival (Italy) Best Actress award for her performance in ‘Patang’ (1994), the Chicago International Film Festival’s Silver Hugo Award for Best Actress and winning the L.A. Outfest’s Outstanding Actress in a Feature Film award for her critically-acclaimed role in ‘Fire’ (1996).

Apart from these, Shabana Azmi also won the Star Screen Award for Best Supporting Actress for her role in ‘Mrityudand’ (1998), the Zee Cine Awards’ Best Actor in a Supporting Role – Female award for ‘Tehzeeb’ (2004) and also winning the Star Screen Awards’ Best Performance in an Indian Film in English award for her performance in ‘Morning Raga’ (2005).