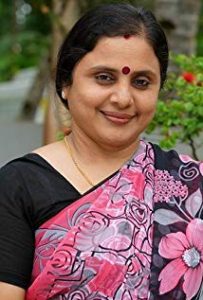 Vanitha Krishnachandran is an actress from India. She was born on 14th March 1966 at Tiruchirappalli, Tamil Nadu, India.

Her father’s name is Ganeshan. Her mother’s name is Kamala. She has two younger sisters. Their names are Sai Prashanthi and Sai Jayalakshmi. She has an elder brother. His name is Sai Ram.

Vanitha Krishnachandran’s height is 5 feet 4 inches and her weight is 54 Kg. Her age is 54 years.

Vanitha Krishnachandran has worked in many movies. Some of them are: