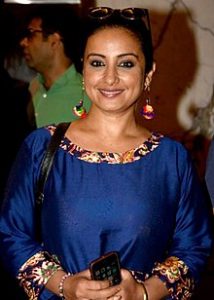 Divya Dutta is a Bollywood Actress from Mumbai, Maharashtra, India. She was born on 25th September 1977 at Ludhiana, Punjab, India.

Her mother’s name is Late Dr. Nalini Dutta. She has one brother. His name is Rahul Dutta. Check out the table below to get complete information on Divya Dutta.

Divya Dutta has worked in many movies. Some of them are:

Divya Dutta has won many awards. Some of them are: