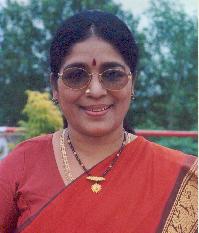 Dubbing Janaki is an actress from Chennai, Tamil Nadu, India. She was born on 28th August 1949 at Peddapuram, Andhra Pradesh, India.

Dubbing Janaki is married. She has two sons and one daughter. Check out the table below to get complete information on Dubbing Janaki.

Dubbing Janaki has worked in many movies. Some of them are:

This movie was released on 16-09-1977. This movie was produced by Uppalapati Surya Narayana Raju and was directed by K. Raghavendra Rao.

This movie was released on 21-01-1981. This movie was produced by B. S. Dwarakish and H. R. Prabhakar Reddy & was directed by Rajachandra.

Dubbing Janaki has worked in many TV serials. Some of them are: