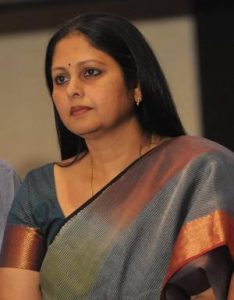 Jayasudha is an actress from Chennai, Tamil Nadu, India. She was born on 17th December 1958 at Madras, Madras State, India.

Jayasudha is married. Her husband’s name is Nitin Kapoor. They have two sons. Their names are Nihar Kapoor and Shreayan Kapoor. Check out the table below to get complete information on Jayasudha.

Jayasudha has won many awards. Some of them are: