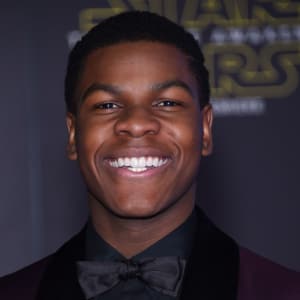 John Boyega is a young British actor who has become globally popular for playing rogue stormtrooper Finn in the latest Star Wars movies.

John Boyega’s real name is John Adedayo B. Adegboyega, was interested in acting since a very young age. John Boyega was recognized by the director of Theater Peckham and was enrolled to learn stage acting while he was in school.

John Boyega earned his National Diploma in Performing Arts from South Thames College and went on to train at the Identity School of Acting, Hackney.

Today, John Boyega has earned several prestigious awards for his impressive acting skills along with numerous award nominations to his credit as well.

John Boyega has become renowned worldwide for playing Finn, the rogue stormtrooper of the First Order in ‘Star Wars: The Force Awakens’ (2015). Prior to this, John Boyega was already a fairly popular actor in the British television industry. John Boyega began acting in school plays and later trained extensively to hone his acting skills. After having earned his diploma John Boyega enrolled to get his bachelors degree but decided to drop out of college to focus on building his acting career.

John Boyega’s success is remarkable despite having a comparatively short acting career. John Boyega’s net worth is estimated around INR 42 crores (USD 6 Million).

Apart from winning these 3 prestigious awards John Boyega has also had around 15 award nominations till date.