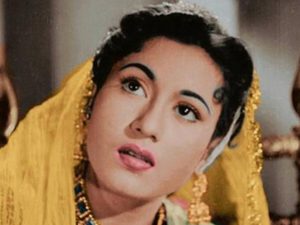 Madhubala was a legendarily beautiful and talented actress in the younger days of Bollywood. Renowned for her immensely beautiful features, Madhubala was the heartthrob of millions of fans not only in India but also all over the world.

Madhubala acted prominently in tragic-romantic roles and worked in the Hindi film industry for over 20 years in the Hindi cinema, from 1942 to 1964.

Madhubala is still regarded as one of the most influential female personalities and impressive actresses from the Bollywood film industry.

Madhubala, whose real name was Begum Mumtaz Jahan Dehlavi, remains one of the legendary and memorable actresses in the entire Indian film industry. With a career spanning over 2 decades Madhubala became one of the most celebrated actresses in Bollywood, in its growing stages.

Madhubala’s father was producer Attaullah Khan, while Madhubala’s mother was Begum Ayesha Mumtaz Jahan. Madhubala had 8 siblings – 2 brothers and 5 sisters, including Chanchal, the actress, Madhur Bhushan (Zahida), who was a renowned playback singer, as well as Kainz Balsara, Shahida Kazi and Altaf Kowal.

Although Madhubala had a strong relationship with veteran actor Dilip Kumar at the time the duo failed to get married due to numerous unforeseen and unfortunate events. However, Madhubala finally married legendary actor Kishore Kumar, in 1960.

In her long career as an actress, Madhubala was praised for many of her film roles. However, posthumously, she has been conferred with several accolades and honors. Despite having passed away over 40 years ago, Madhubala remains one of the most popular actress celebrity in the Indian film industry. Madhubala was ranked amongst Rediff.com-sponsored International Womens’ Day Special “Bollywood’s Best Actresses” list.

Two of her most popular films, ‘Mughal-E-Azam’ and ‘Half Ticket’, were digitally remastered and presented in colorized version in 2004 and 2012, years after her demise. The Government of India also recognized her as one of the most influential personalities in India and issued a limited-pack postage stamp with her likeness in March of 2008. Madhubala and Nargis Dutt are the only two Indian film actresses to have been bestowed this honor till now.

Apart from this, Madame Tussauds unveiled a wax statue of Madhubala dressed in her memorable role of Anarkal in the legendary super hit ‘Mughal-E-Azam’ movie, in December of 2017.