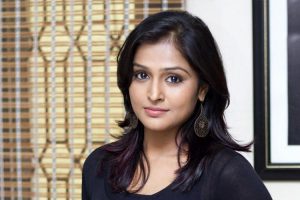 Ramya Nambeesan is a South Indian Actress and a playback singer from Valasaravakkam, Chennai, Tamil Nadu. She was born on 1st January 1986 at Chottanikkara (Kochi), Kerala, India.

Her father’s name is Subrahmaniam Unni. her mother’s name is Jayasree. She has one younger brother. His name is Rahul. Check out the table below to get complete information on Ramya Nambeesan.

Ramya Nambeesan has worked in many movies. Some of them are:

Ramya Nambeesan has sung many songs and albums. Some of them are:

This is the song from the Malayalam movie “Ivan Megharoopan”.

This is the song from the Malayalam movie “Bachelor Party”.

This is the song from the Tamil movie “Pandianadu”.

Ramya Nambeesan has won many awards. Some of them are: