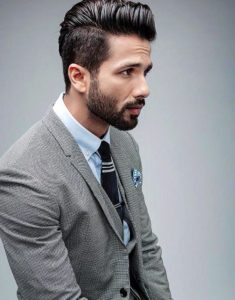 Initially recognized for his cute looks which perfectly fit the romantic roles he played, Shahid Kapur is now regarded as one of the best action and thriller movie stars in Bollywood. Although Shahid Kapur began his career as a background dancer for movies and appeared in TV ads and music videos he made his big-screen debut in 2003 in a romantic role.

Today, Shahid Kapur is regarded as not only one of the best-looking actors in the Indian film industry, but is widely praised for his intense action and comic roles too.

Shahid Kapur is one of the most handsome and talented actors in the Indian Hindi film industry. Initially, he was considered by directors mainly for romantic roles, which fit his cute chocolate-boy looks, Shahid Kapur soon transcended to action and thriller characters. Shahid Kapur has proven his worth as an actor with a number of huge hits as well as several awards and numerous accolades.

Being a good-looking youngster, initially Shahid Kapur was in a relationship with three different actresses consequently – Hrishita Bhatt, Kareena Kapoor and Priyanka Chopra. However, Shahid Kapur’s wife is Mira Rajput, whom he married on the 7th of July 2015. Shahid Kapur and Mira Rajput have a lovely daughter, Misha Kapur, who was born in 2016.

In his spare time, Shahid Kapur’s hobbies include reading or dancing, as he is a trained dancer from the Shyamak Davar Dance Academy since he was 10 years old.

Talking about his success as an actor in Bollywood, Shahid Kapur has won several awards for his extensive variety of roles. The list of International Indian Film Academy (IIFA) awards won by Shahid Kapur include the Star Debut of the Year – Male award for his first Bollywood movie, ‘Ishq Vishk’ (2003) and two Best Actor awarda for ‘Haider’ (2015) and again for ‘Udta Punjab’ (2017).

Besides these main awards, Shahid Kapur is also the winner of several other honors and accolades.