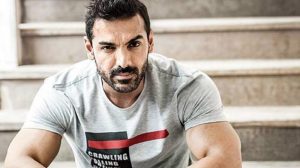 Although John Abraham started off as an executive with a PR firm in Mumbai, he soon entered modeling and was quite popular. John Abraham’s life changed when he won the Gladrags Manhunt Contest and stood second in the Manhunt International event. After having appeared in numerous advertisements and music videos he joined Enterprise-Nexus brand as a media planner. It was during this time that he joined the Kishore Namit acting lab to sharpen his acting skills.

Although his debut movie was average at the box-office, his next, the first in the ‘Dhoom’ action-thriller series as the main protagonist made critics and fans recognize him as a talented actor too.

John Abraham is definitely one of the best-looking men in the entire Indian film industry. With a background in modeling which enabled him to eventually become an actor, John Abraham is one of the most desired men in India today.

John Abraham’s height is exact 6 ft (183 cm) while John Abraham’s weight is around 95 kg (209 lbs). Being naturally broad-shouldered, John Abraham is also considered to have one of the top best physiques in the entire Indian film industry. In his spare time, John Abraham’s hobbies include working out at the gym or riding one of his numerous motorcycles around town.

Apart from being an actor, John Abraham is also a huge philanthropist and is connected to varied NGOs, including PETA and Habitat For Humanity.

After completing his MBA from the Mumbai Educational Trust college, John Abraham initially joined as an executive with Time and Space Media Entertainment Promotions Limited, and later worked as a media planner for the popular PR brand, Enterprises-Nexus.

After entering and winning the Gladrags Manhunt Contest in India, John Abraham went on to win the second place in the Manhunt International event, held in the Philippines. This enabled him to get modeling contracts from all over the world, including New York, London and Hong Kong. After appearing in music videos and numerous TV advertisements John Abraham joined the acting lab organized by Kishore Namit Kapoor.

John Abraham is also an accomplished film producer, with his first production, ‘Vicky Donor’, starring newcomer Auyshman Khurana, was a major hit at the box office. His second production was ‘Madras Cafe’ where he played the lead role as well, and the movie recieved rave reviews from critics.

Next, John Abraham won the Stardust Awards’ Stardust Superstar of Tomorrow – Male award for his second movie, ‘Paap’ (2005), as well as winning the IIFA Best Villain Award and the Zee Cine Award for Best Actor in a Negative Role for his superhit, ‘Dhoom’ (2005).

Later, John Abraham shared the Star Screen Award Jodi No. 1 award with Abhsihek Bachchan, for his role in the comedy movie, ‘Dostana’ (2008). Next, John Abraham won the Asiavision Awards’ Icon of the Year award for his movie ‘Madras Cafe’ (2013).