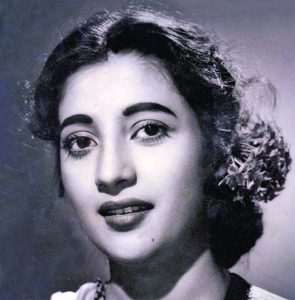 Suchitra Sen remains one of the most memorable actress from the Indian film industry. Suchitra Sen’s work in the Bengali and Hindi cinema is considered by film critics as being some of the most classic acting, till date.

Considered to be the Greta Garbo of Indian cinema, Suchitra Sen gave some of the most sensational acting performance in Bengali cinema, especially when she was paired opposite noted Bengali actor, Uttam Kumar.

Although married when she was only 16, Suchitra Sen became a household name in Bollywood and Bengali film industries thanks to her family’s support for her acting career.

Suchitra Sen continues to being regarded as the finest actress to have graced the Bengali film industry. Her legendary drama acting skills, combined with pitch-perfect dialogue delivery made Suchitra Sen an inspirational and super hit actress of the 1960s and 1970s.

Suchitra Sen’s father was late Karunamoy Dasgupta, who worked as a sanitation officer, while Suchitra Sen’s mother was Indira Devi, a homemaker. Although their names are not known, Suchitra Sen is said to have had 4 other siblings – 2 elder sisters and 2 elder brothers. Suchitra Sen’s husband was Dibanath Sen, a popular businessman who later ventured into film production in the Bengali movie industry.

Thanks to her immense success as an actress in the Bengali and Hindi film industries, Suchitra Sen’s net worth, at the time of her demise in 2014, is estimated to be around INR 67 crores (USD 9.5 Million).

Suchitra Sen has also had the Filmfare Best Actress Award nomination for her role in the super hit Bollywood movie ‘Mamta’ (1967).