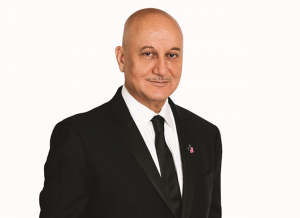 Anupam Kher is one of the most prolific and talented actors in the Indian film industry. Being a veteran of Bollywood, Anupam Kher has appeared in over 500 movies, in various languages and for various international film industries. Despite originally being a theater artist, Anupam Kher found fame and was awarded five times for his comic roles in the 1990s.

Anupam Kher’s performances in foreign films is also laudable. He has received awards and nominations for his impressive acting performance. Apart from being an experienced actor, Anupam Kher is also the Chairman of the Film and Television Institute of India. Previously, he has been the chairman of the Central Board of Film Certification as well as the National School of Drama (NSD), in New Delhi.

Anupam Kher’s immense contribution to the development of the Indian film industry has honored him with highest citizen awards from the Indian government.

Anupam Kher was born in Shimla (Himachal Pradesh) to (late) Pushkarnath Kher, and ex-clerk in the Forest Department, and Dulari Kher, a homemaker. Having completed his schooling from the D.A.V. School in his hometown, Anupam Kher went to Punjab University (Chandigarh) and finally graduated in theater arts from the National School of Drama (New Delhi).

Anupam Kher’s wife is renowned Bollywood and Bengali movie actress, Kirron Kher, whom he is married to since 1985. Previously, Anupam Kher was married to Madhumalati, however, the couple divorced a long time ago. Anupam Kher and Kirron Kher have a son – actor Sikander Kher.

Apart from being popular as a film actor, Anupam Kher has been a prominent TV personality as well. Anupam Kher has hosted popular TV shows, including ‘Say Na Something To Anupam Uncle’, ‘Lead India’, ‘Sawaal Dus Crore Ka’, and the latest, ‘The Anupam Kher Show – Kucch Bhi Ho Sakta Hai’, which is a celebrity talk show.

Displaying his comic talent once again, Anupam Kher won the Global Indian Film Awards’ Best Actor in a Comic Role award and the Hindi Movie Award for Best Comedian, for his role in the super hit comedy, ‘Khosla Ka Ghosla’ (2007).