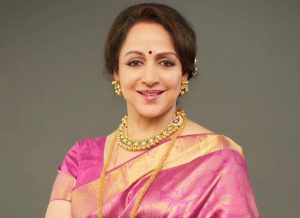 Hema Malini is an extremely popular actress from the Indian film industry. Hema Malini is mostly renowned for her comic roles and dancing skills in over 150 movies she starred in.

Hema Malini, apart from being an award-winning actress, is also a trained classical Indian dancer, a film director, movie producer as well as being a politician.

Hema Malini is one of the most popular and veteran actresses in the Indian Hindi film industry. Hema Malini is a multi-talented artist and is also known for being a writer, film director, movie producer, Indian classical stage dancer as well as having been a Member of Rajya Sabha and Member of Lok Sabha, from the Bhartiya Janta Party (BJP).

Thanks to her successful and long acting career, along with numerous brand endorsement deals and other investments, Hema Malini’s net worth is around INR 682 crores (USD 94 Million).

Being an extremely talented actress, especially in the comic and drama genre, Hema Malini has won several awards and been nominated numerous times too.

The list of Hema Malini’s awards include winning the Filmfare Award for Best Actress for her impressive double-role in ‘Seeta Aur Geeta’ (1973) and the Bollywood Movie Awards’ Most Sensational Actress award for her excellent performance in ‘Baghban’ (2004).

Apart from having won these acting awards, Hema Malini was also nominated several times for her impressive roles in several movies.