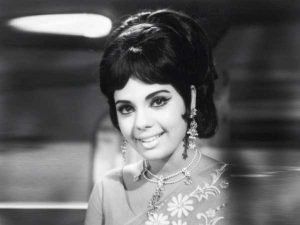 Mumtaz is one of the most renowned actors from the younger days of Indian film industry. Mumtaz is renowned for playing unconventional characters, despite having the beauty and charm which was out of this world.

Mumtaz made her acting debut as a child artist in the Hindi film industry in 1958 and has since appeared in numerous movies, especially in action roles.

Mumtaz is renowned for her impressive performance in physically-demanding role in her movies and attracted millions of fans, including some of the top actors in the industry of the time.

Mumtaz is one of the most popular actresses of the heydays of Bollywood. She was the top star of action movies and was popular was doing her own stunts. The obsession to perform her own stunts made her co-star, popular wrestler and actor Dara Singh to start calling her ‘Stunt Princess’.

Mumtaz’s father was a dry fruit vendor, Abdul Saleem Askari while Mumtaz’s mother was of Irani-Afghani descent, called Shadi Habib Agha. Although Mumtaz does not have any brothers, Mumtaz’s younger sister is also an actress, called Mallika, who later married Dara Singh’s younger brother, Randhawa Singh. Mumtaz was rumored to be in relationship with several of her co-stars, including the likes of Rajesh Khanna, Shammi Kapoor and Dharmendra. However, Mumtaz’s husband was the late businessman, Mayur Madhvani, whom she married to since 1974. Mumtaz and Mayur Madhvani have two lovely daughters – Natasha Madhvani and Tanya Madhvani.

Talking about her success as an actress in the Indian film industry, Mumtaz has won the Bengali Film Journalists Association (BFJA) Award for Best Supporting Actress for her impressive performance in ‘Brahmachari’ (1968). Mumtaz has also won the Filmfare Best Actress Award for her excellent acting in ‘Khilona’ (1970).

Besides these, Mumtaz was also honored with the Filmfare Lifetime Achievement Award in 1996 and the International Indian Film Academy (IIFA) 2008 Honorary Award for Outstanding Contribution by an Indian in Cinema too.