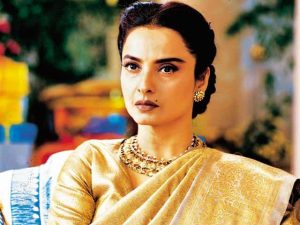 Rekha is an extremely popular and critically-acclaimed actress from the Indian film industry. Renowned for playing some of the most controversial characters in her numerous movies, Rekha remains ranked amongst the top actresses in Indian cinema.

After having made her debut as a child artist in 1966, Rekha has appeared in over 180 films till date and dominates the acting scene even today.

With a career spanning over 50 years Rekha remains one of the most talented actresses and popular celebrities in the country.

Rekha is considered to be a legend in the Indian cinema, having worked for over five decades in the industry. Rekha has starred in several memorable roles and her evergreen beauty has made millions of fans worldwide.

Rekha’s age is 64 years old as Rekha was born on the 10th of October, 1954, in present-day Chennai. Rekha’s height is 5 ft 6 inches (168 cm) while Rekha’s weight is around 60 kg (132 lbs). In her spare time, Rekha loves making charcoal sketches, writing poetry or doing yoga, as her hobbies.

Rekha’s father is the popular Tamil actor, Gemini Ganesan, while Rekha’s mother is popular Telugu actress, Pushpavalli. Rekha has one step-brother, Sathish Kumar Ganesan while Rekha has 6 step-sisters – Radha, Vijaya Chamundeswari, Narayani Ganesh, Kamala Selvaraj, Jaya Sreedhar and Revathi Swaminathan. Being one of the most attractive actresses in the Indian film industry in the 1960s and 1970s, Rekha was rumored to have been in relationship with several celebrities. Several media outlets named Rekha’s boyfriends as being the Bengali/Hindi actor Biswajit Chatterjee, late actor, Vinod Mehra, the actor Sajid Khan, actor Navin Nischol, actor Jeetendra, actor Shatrughnan Sinha, legendary actor Amitabh Bachchan, and even actor Akshay Kumar. However, Rekha’s husbands include Vinod Mehra, whom she married in secret but was divorced as his mother refused to accept the marriage. Later on, Rekha’s husband was the late businessman, Mukesh Agrawal, whom she married in January of 1990, till his death in October of 1990, after a rocky relationship.

Owing to her immense work in the Indian film industry, as well as being the face of numerous luxury brands in the country, Rekha’s net worth is estimated to be around INR 290 crores (USD 40 Million).

Apart from these prestigious acting awards, Rekha has also been honored with the Padma Shri Award, India’s 4th-highest civilian award, by the Government of India, in 2010, for her immense contribution to Indian cinema.