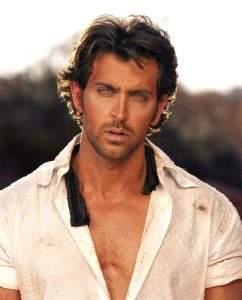 Hrithik Roshan, known lovingly as ‘Duggu, is one of the most handsome and popular actors in the Bollywood film industry. Apart from his acting talent, Hrithik Roshan is an amazing dancer, renowned for his versatile dancing prowess.

Before his debut in 2000, Hrithik Roshan had starred as a child-artist in several movies in the 1980s. Later on, he also assisted his father, renowned Bollywood director Rakesh Roshan, in making four films. Hrithik has portrayed several diverse characters in his film careers as an actor, from the blue-eyed romantic boy of ‘Kaho Na.. Pyar Hai’, to the superhero ‘Krrish’, and even a quadriplegic in ‘Guzaarish’.

Although Hrithik Roshan dazzles fans with his finely chiseled looks and light eyes, his childhood was fraught with personal hardships. Born with an additional thumb on his right hand, and having a stammering speech impediment was tough for him as a child. However, he soon accepted his physical aspect and got rid of his stammering with regular speech therapy.

Hrithik Roshan has often been called a ‘Greek God’ thanks to his sharp features and sculpted physique. Even though Hrithik Roshan’s age is 44 years, he gives stiff competition to other new, good-looking contemporary actors of today. He has also been referred to as ‘Sexiest Indian’ by numerous magazines and tabloids. Talking about his stats, Hrithik Roshan’s height is 5 ft 11 inches (180 cm), while Hrithik Roshan’s weight is about 85 kg (187 lbs).

Hrithink Roshan celebrates his birthday on the 10th of January, and was married to Suzanna Khan, daughter of popular TV actor Sanjay Khan, for around 14 years (2000 to 2014), before the couple got divorced. Hrithik Roshan has two lovely sons with Suzanne Khan – Hrehaan Roshan and Hridhaan Roshan. Before getting married to Suzanne Khan, he was rumored to have had affairs with at least 2 other actresses – Bollywood’s Kareena Kapoor and Holloywood’s Barbara Mori, apart from his fling with actress Kangana Ranaut after his divorce.