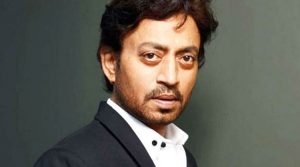 Irrfan Khan debuted in his first commercial film in 1988, and soon rose to prominence as an actor in his later releases. Not backing from challenging roles, Irrfan Khan has received immense critical acclaim, as well as awards, for his negative roles and playing the anti-hero in several of his movies. His work in the foreign film industries is also commendable and Irrfan Khan has appeared as an actor in a couple of Hollywood hits as well.

in 2018, Irrfan Khan was diagnosed with a rare disorder, ‘Neuroendocrine Tumor’, and is undergoing treatment for it.

Irrfan Khan is most popular for the huge variety of roles he is able to portray with a natural flair. His acting skills come so naturally that audiences are immersed in his dialogues. His unique dialogue delivery is one of the most amazing aspects of his acting prowess.

Irrfan Khan’s age is 51 years and he celebrates his birthday on the 7th of January every year. Irrfan Khan’s height is exactly 6 ft (183 cm) while Irrfan Khan’s weight is around 75 kg (165 lbs). Irrfan Khan was born in Jaipur, Rajasthan, and he is a diploma-holder in Dramatic Arts from the National School of Drama in New Delhi. Irrfan Khan loves to read or play cricket as his hobbies.

Although Irrfan Khan made his commercial debut in 1988 in Mira Nair’s ‘Salaam Bombay!’, he had already established himself as an impressive actor with a string of TV roles. Talking about Irrfan Khan’s success as an established actor, he has received numerous awards.

In 2008, Irrfan Khan won the Producers Guild Film Award for Best Actor in a Supporting Role, Filmfare Awards’ Best Supporting Actor, the International Indian Film Academy Awards’ Best Supporting Actor and the Screen Award for Best Comedian for his role in ‘Life In A… Metro’. In the same year, Irrfan Khan also rose to international fame when he won the Screen Actors Guild Award for Outstanding Performance by a Cast in a Motion Picture and the Central Ohio Film Critics Association’s Best Ensemble Award for the global hit, ‘Slumdog Millionaire’.