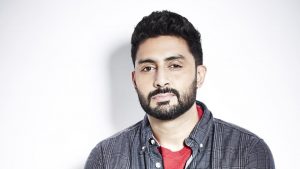 After his debut in 2000, Abhishek Bachchan did not meet much success in terms of hits for over 4 years. In 2004, with the release of the first ‘Dhoom’ movie, however, his career rocketed to new heights. The rest of the decade saw Abhishek Bachchan star in some of the most hit movies. He also received critical acclaim for several of his roles which he had pulled off with perfection.

Since then, Abhishek Bachchan’s movies have been largely commercial hits and he has received several awards for his versatile acting skills, much in the steps of his father, the Big B.

Abhishek Bachchan’s marriage to former Miss World and Bollywood actress, Aishwarya Rai, was a much talked about event in 2007.

Apart from his wife, Aishwarya, Abhishek Bachchan has had relationships with three of his co-actresses – Karishma Kapoor, Rani Mukherjee and Dipannita Sharma.

Even though his stardom was late to rise, Abhishek Bachchan has starred in almost 30 movies in his 18 years as an actor. After his debut movie, ‘Refugee’ (2000), failed to become a hit, he starred in several other movies for around 4 years, however he lacked the critical and commercial success of Bollywood superstars. The first movie in the ‘Dhoom’ action-thriller series in 2004 finally enabled him to show his acting prowess, and the movie was a huge commercial hit at the box office.

Since then, Abhishek Bachchan has received the Stardust Best Supporting Actor award for his role in his home-production, ‘Paa’ (2010), and the Zee Cine Award for Best Actor in a Comic Role for his movie, ‘Bol Bachchan’ (2013).

Apart from these movie awards, Abhishek Bachchan is also the recipient of the ‘Yash Bharati Samman’, the state government of Uttar Pradesh’s highest citizen honor, in 2006.