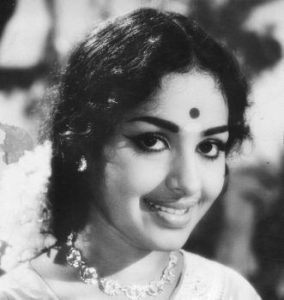 Her father’s name is Ramachandran. He was an Indian Army. Her mother’s n name is Kalyani. She was a housewife. She has one brother. His name is Narayanan. She has four sisters. Their names are K. R. Vatsala, K. R. Savithri, Sashikala, Radha.

K. R. Vijaya is married. Her husband’s name is M. Velayuthan Nair. He died on 26th March 2016. He was the CEO of Sudarshan trading company and a movie producer. They have one daughter. Her name is Hemalatha. Check out the table below to get complete information on K. R. Vijaya.

K. R. Vijaya has worked in many films and TV serials. Some of them are:

K. R. Vijaya has won mnay awards. Some of them are: