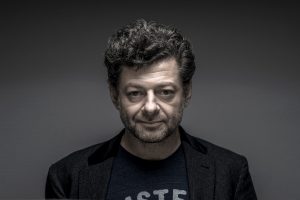 Andy Serkis is a brilliant English actor who is most renowned for his motion-capture performances in several super hit Hollywood movies.

Andy Serkis is an extremely talented stage, TV and movie actor who has also revolutionized acting with his motion-capture performances. Andy Serkis’s motion-capture acting as Gollum/Smeagol in the Lord of the Rings movie franchise and as Cesar in latest Planet of the Apes movie trilogy are considered truly extraordinary feats in acting.

Andy Serkis became interested in acting in his first year at Lancaster University where he was studying visual arts. After changing his major subject to acting, Andy Serkis soon began his journey to theater, then television before finally making his movie debut in 1994.

Andy Serkis is truly one of the most talented and versatile actors of this generation. Andy Serkis is globally popular for playing some of the most famous motion-capture characters in Hollywood movie industry. Andy Serkis’s brilliant performance as Smeagol/Gollum and Cesar have made him one of the most popular character actors today. Although Andy Serkis wanted to become a graphic design and make posters his casual first stage appearance in his first year in college transformed his career path. Today, Andy Serkis has become a world famous British actor, movie producer and film director as well.

Andy Serkis’ success as an actor can be guessed easily from the numerous awards Andy Serkis has won till date. The list of Andy Serkis’ award-wins include winning the:

Besides winning 15 awards Andy Serkis has also had 28 award nominations in his career as an actor.