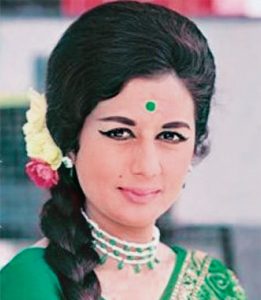 Nanda is one of the most renowned actresses from Bollywood’s younger days. Nanda is considered by critics and fans alike as being one of the top dramatic movie actresses of her time, even comparing her to the legendary Meena Kumari.

Nanda is most popular for her roles in Hindi and Marathi with a career spanning over 30 years.

Strangely, it was not a passion for acting that brought Nanda into movies, but rather the need to support her family of 6 siblings.

Actress Nanda is counted amongst the most talented actresses of yesteryear Bollywood. Having been an actress since she was only 8 years of age, Nanda became known as one of the top supporting actresses at the peak of her career.

Nanda’s father was the famous Marathi actor, filmmaker and producer, Vinayak Damodar Karnataki, also known as ‘Master Vinayak’ in the Indian film industry. Whereas, Nanda’s mother was Meenaxi (Sushila) Karnataki, a homemaker. Apart from her parents, Nanda reportedly had 6 other siblings in her family. Although she was on the verge of marrying once, Nanda remained unmarried all through her life.

Thanks to being active in the Bollywood film industry for over 30 years, Nanda’s net worth is estimated to be around INR 214 crores (USD 29 Million).