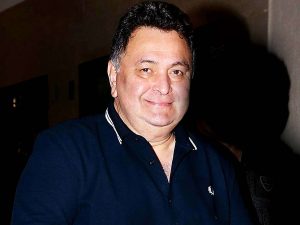 Rishi Kapoor is amongst the most veteran actors in the Indian film industry. Belonging to a family of legendary Bollywood figures, Rishi Kapoor has proven his worth by winning a national award for his childhood debut. Throughout his almost 50 years career in Bollywood, Rishi Kapoor has acted in numerous hit movies,  in the lead roles and as a supporting actor.

Apart from being an actor Rishi Kapoor is also a renowned producer and director in the Bollywood film industry. While in his younger years, Rishi Kapoor was also voted as being one of the most attractive male actors in the Indian film industry, thanks to his fair, healthy looks.

Rishi Kapoor is one of the most experienced actors in the Indian Hindi film industry. He has appeared in over 100 films and began work as a child actor in movies, right since 1970.

Rishi Kapoor’s wife is the popular actress of the 70s and 80s, Neetu Singh, whom Rishi Kapoor married on 22nd of January 1980. Before getting married to Neetu Singh, Rishi Kapoor was rumored to have had affairs with two other girlfriends – Yasmin (Actress) and Dimple Kapadia (Actress) who was his opposite lead in his debut movie, ‘Bobby’ (1973).

Rishi Kapoor’s list of award include the National Film Award and the Bengal Film Journalists’ Association Awards’ Special Award for his cameo appearance as the childhood character of his father, Raj Kapoor’s character, in the hit movie, ‘Mera Naam Joker’ (1970). After making his lead debut, Rishi Kapoor won the Filmfare Award for Best Actor for ‘Bobby’ (1973).

Rishi Kapoor won the Apsara Film & Television Producers Guild Awards’ Best Actor in a Supporting Role award for his role in ‘Love Aaj Kal’ (2010). The next year, Rishi Kapoor won the Filmfare Critics’ Award for Best Actor for his role in ‘Do Dooni Chaar’ (2011) and also won the Zee Cine Awards Best Lifetime Jodi award, along with his wife Neetu Singh.

After having had his impressive performance as Rauf Lala applauded by fans and critics alike, Rishi Kapoor won The Times of India Film Awards’ (TOIFA) Best Actor in a Negative Role award for the movie ‘Agneepath’ (2013). In 2016, Rishi Kapoor was awarded the Screen Lifetime Achievement Award as well.