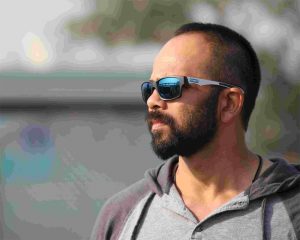 Rohit Shetty is a movie director from India. He was born on 14th March 1974 at Mumbai, Maharashtra, India. His hometown is Mangalore, Karnataka, India.

His father’s name is Madhu Balwant Shetty. He was an actor and fight director. His mother’s name is Ratna Shetty. Rohit Shetty five siblings two stepbrothers and three sisters.

Rohit Shetty is married. His wife’s name is Maya Shetty. She is a Banker. They have a son. His name is Ishaan Shetty. Check out the table below to get complete information on Rohit Shetty.

Rohit Shetty’s height is 6 feet 1 inch and his weight is 80 Kg. His age is 48 Years.It is not known if Rohit Shetty smokes or drinks alcohol.

Rohit Shetty is widely famous for his action scenes and comedy dramas in his films. He has directed many films. Some of them are:

Rohit Shetty is also famous on Indian Television Reality shows. Some of his shows are:

Rohit Shetty has been awarded a number of awards for his works. Some of his awards are: