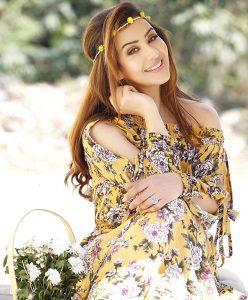 Shilpa Shinde is an actress from India. She was born on 28th August 1977 at Mumbai, Maharashtra, India.

Her father’s name was Dr. Satyadeo Shinde. He was a judge in High Court. Her mother’s name is Geeta Shinde. Shilpa Shinde has one brother and two sisters. They are Ashutosh Shinde, Shubha Shinde, and Archana Shinde.

Shilpa Shinde had a boyfriend. His name was Romit Raj. He was an actor. Check out the table below to get complete information on Shilpa Shinde.

Shilpa Shinde’s height is 5 feet 04 inches and her weight is 65 Kg. Her age is 45 Years. It is not known if Shilpa Shinde smokes but she drinks alcohol.

Shilpa Shinde has recently started her carrier in politics by joining Congress Party and going to participate in Loksabha elections. She is the winner of the reality show Bigg Boss Season 11.

Shilpa Shinde got her fame from her role of Angoori Bhabhi in the show “Bhabhi G Ghar Par Hain”. She has worked in many serials and films. Some of them are: