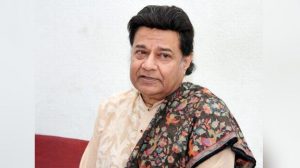 Anup Jalota is a singer from India. He was born on 29th July 1953 at Nainital, Uttarakhand, India. He basically belongs from Phagwara, Punjab, India.

Anup Jalota’s height is 5 feet 4 inches and his weight is 80 Kg. His age is 69 Years. It is not known if Anup Jalota smokes but he drinks alcohol.

Anup Jalota has sung many bhajans and ghazals. Some of them are:

Some famous devotional songs of Anup Jalota are:

Anup Jalota has been seen in the world’s famous reality show “Bigg Boss” season 12 as a Jodi with Jasleen Matharu. He is also a member of the political party “Bharatiya Janata Party”.

Anup Jalota is a Padma Shri awardee in the field of Art-Indian Classical Music by The Government of India. He has won many more awards and achievements. Some of them are: