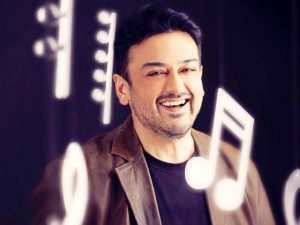 Adnan Sami Khan is a singer from India. He was born on 15th August 1971 at London, England, UK.

His father’s name was Late Arshad Sami Khan. He was a Former Pilot at Pakistan Air Force. His mother’s name is Naureen Khan. Adnan Sami has a brother. His name is Junaid Sami Khan.

Adnan Sami is married for four times. His first wife’s name is Zeba Bakhtiar (m. 1993-1997). They have a son. His name is Azaaz Sami Khan. Adnan Sami’s second wife’s name is Sabah Galadari (m. 2001-2004) and after a year married third time with Sabah Galadari (m. 2007-2012). Adnan Sami’s third wife and fourth marriage were with Roya Faryabi (m. 2010 present). They have a daughter. Her name is Medina Sami Khan. Check out the table below to get complete information on Adnan Sami.

Adnan Sami’s height is 5 feet 9 inches and his weight is 74 Kg. His age is 50 Years. It is not known if Adnan Sami smokes or drinks alcohol.

Adnan Sami has sung many songs and albums in English as well as Hindi languages. Some of them are:

As a singer and music director Adnan Sami has won many awards. Some of his awards are:

Adnan Sami has hosted an American Music game show named “Bol Baby Bol” in which the theme was Don’t Forget The Lyrics. He has been seen in Bollywood as an actor. Some of his movies are: