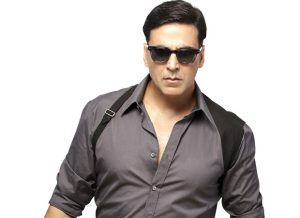 Akshay Kumar, born Rajiv Bhatia, is a well-known Bollywood actor and one of the top Indian celebrities. Apart from being a professional actor, Akshay Kumar is also an established martial artist, TV personality and producer. The tens of thousands of his fans are crazy for the fact that ‘AK’, as he is lovingly known, does all his own action stunts in his movies.

Akshay Kumar has been an integral part of the Indian film industry for more than 25 years now. In this long career, Akshay has starred in over 100 movies, and has also won several acclaimed awards for his versatile roles.

According to industry sources, Akshay Kumar is listed amongst the top successful Bollywood actors of recent times. Akshay Kumar is the only actor in Bollywood whose movies’ domestic collection crossed the INR 2000-crore mark (2013) and INR 3000-crore mark (2016). As Akshay loves to release several films in a year, it has made him one of the most prominent actors, on par with the three Khans of Bollywood – Amir Khan, Salman Khan and Shahrukh Khan.

Akshay Kumar, fondly called as the Khiladi (Player) of Bollywood is definitely one of the most accomplished actors in the country. He has appeared in over 100 movies and has played versatile characters – from the anti-hero to comedy and, his favorite, the action genre. AK had a passion to become an actor and was a fitness enthusiast from an early age. After having dropped out of college, Akshay moved to Bangkok to learn martial arts and Muay Thai. It is popularly known how he struggled there to support himself by working as a waiter and then as a chef in several eateries in Bangkok.

After returning to Mumbai, Akshay began teaching martial arts. This is where one of his photographer students suggested he try out for modeling. After his initial ad-shoot, Akshay was soon signed up to appear in the movie Deedar in 1991. However, Akshay Kumar debuted opposite Rakhee in Saugandh, in the same year.

Today, even though Akshay Kumar’s age is over 50 years old, his body is still at peak fitness levels, thanks to his unique weight-less workouts. This workout has allowed Akshay Kumar to maintain a toned and slim physique and allows him to perform all his action stunts in the movies. Akshay Kumar workout routine involves combining the best aspects of kick-boxing, swimming, Parkour and playing basketball.

Akshay Kumar’s wife, Twinkle Khanna, was engaged twice to him before they finally decided to tie the knot on 17th of January, 2001. Together, the couple has two lovely children, son Aarav, and daughter Nitara.