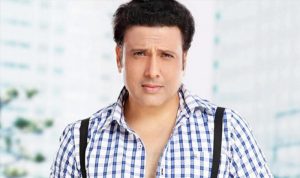 Govinda is a renowned and experienced actor in the Bollywood film industry. Known mainly for his romantic, comic and action roles in the early 19902, Govinda has today become one of the most renowned and popular celebrities with millions of passionate fans spread all over India and abroad as well.

In his long career as a film actor, Govinda has been nominated numerous times for awards, and has won several popular awards, thanks to his impressive acting skills.

Apart from being a popular actor, Govinda is also a former politician from Mumbai.

Govinda is highly popular amongst the masses and his hardcore fans can be found in the deeper reaches of India. After being recognized for his impressive and virile dancing skills, Govinda also proved himself to be a talented movie actor as well. Till date, Govinda has worked in over 150 movies, as an actor in a career spanning over 30 years in the Indian Hindi film industry.

Govinda’s real name is Govind Arun Ahuja, but he prefers to go by his stage name, Govinda. Govinda is also called ‘Chi Chi’ lovingly by friends, family and the media and fans too. Govinda’s age is 55 years as Govinda’s date of birth is 21st of December, 1963. Govinda was born in Virar, then a far northern suburb of Mumbai. Govinda’s father was the late actor Arun Kumar Ahuja while Govinda’s mother is Nirmala Ahuja.

Prior to getting married, Govinda’s girlfriends included popular Bollywood actresses, Neelam Kothari and Rani Mukherjee. Today, Govinda’s wife is Sunita Ahuja, whom he is married to since March, 1987. Govinda and his wife, Sunita Ahuja, have two lovely children, son Yashvardhan Ahuja, and daughter, Tina Ahuja, an actress.

In his 30 + years long career in the Bollywood film industry, Govinda has starred in some of the most successful commercial and critics’ hits. For this, Govinda has received numerous award nominations and he has successfully won many prestigious movie awards for his entertaining acting skills.

The list of Govinda’s awards include the Filmfare Special Award for ‘Saajan Chale Sasural’ (1997) and the Filmfare Best Comedian Award for ‘Haseena Maan Jaegi’ (2000). Govinda has also won the Star Screen Awards’ Special Jury Award for his role in ‘Coolie No. 1’ (1995).

Apart from these, Govinda is also the winner of the Star Gold Awards’ Excellent Comic Actor award as well as the MTV Lycra Style Awards’ Most Stylish Comeback Award, for his role in ‘Partner’ (2007).

Later on, Govinda went on to share the Apsara Film & Television Producers Guild Awards’ NDTV Imagine Best Jodi of the Year award for his movie ‘Partner’ (2007), with Salman Khan.

Recently, Govinda won the Stardust Award for Best Actor twice, once for his role in ‘Happy Ending’ as well as for ‘Kill Dil’ (2015).

Apart from wining these prestigious awards, Govinda has also been nominated numerous times for his impressive roles.