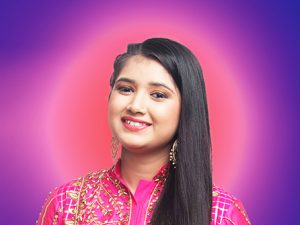 Ishita Vishwakarma is a very talented young singer from Madhya Pradesh who rose to fame with her incredible performances in Zee TV’s ‘Sa Re Ga Ma Pa’ (2018).

Ishita Vishwakarma has wowed judges and audiences alike with her incredibly sweet and melodious voice.

Ishita Vishwakarma is a truly gifted singer who began singing when she was only 3 years old. After hearing her mother sing  was inspired for life and soon began taking singing lessons from her mother, who is a trained classical singer too. After having made waves with her appearance on ‘Sa Re Ga Ma Pa Li’l Champs’ in 2015, Ishita Vishwakarma became a household name and performed in numerous concerts and singing competitions in Madhya Pradesh. Ishita Vishwakarma is also recognized for her devotion to stop the blight of child marriage from the country and her support for the ‘Swachh Bharat” (Clean India) Campaign.