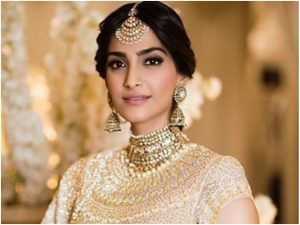 Although she comes from a Bollywood family, Sonam Kapoor earned her degree in studying theater and arts and becoming an assistant director, before finally making her debut in 2007.

Sonam Kapoor is a fashion icon and is also known to be outspoken on social causes, ranging from raising awareness about breast cancer to supporting LGBT rights.

Sonam Kapoor is a truly talented actress whose impressive performances has earned her prestigious acting awards and other honors. Apart from being one of the most stylish celebrities in India, Sonam Kapoor is also a commercially successful actress as well.

Sonam Kapoor’s age is 33 years as Sonam Kapoor was born on the 9th of June, 1985, in Mumbai. Sonam Kapoor’s height is an impressive 5 ft 9 inches (175 cm), while Sonam Kapoor’s weight is around 55 kg (121 lbs). In her spare time, Sonam Kapoor loves to read and write, play video games, go shopping and also loves to collect paintings, as part of her hobbies.

Thanks to her impressive acting talent, Sonam Kapoor’s salary per film is around INR 5 crores (USD 678,000), making her one of the highest-paid actresses of Bollywood. Combing her salary from movies along with her numerous brand endorsement contracts with luxury brands, Sonam Kapoor’s net worth is estimated to be an impressive INR 106 crores (USD 14.5 Million).

Talking about her success as a talented actress, Sonam Kapoor is the winner of several prestigious awards and has had numerous award nominations for her movies as well.

The list of Sonam Kapoor’s award-wins started when she won the Stardust Awards’ Superstar of Tomorrow award, for her impressive debut in ‘Saawariya’ (2008). Along with winning this award, Sonam Kapoor also had 3 award nominations for her excellent debut as well.

Sonam Kapoor won the Stardust Awards’ Best Actress in a Comedy or Romance award for her  role in ‘Khoobsurat’ (2015). Sonam Kapoor also had 3 major award nominations for the same movie as well.

Most recently, Sonam Kapoor was awarded the Dadasaheb Phalke Film Foundation Awards’ Best Actress in a Leading Role award for her excellent performance in ‘Pad Man’ (2018).