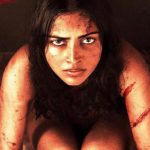 Not only the South heroes but also the heroines are creating sensations. Ready to act anyway, if the role demands. Recently, South heroine Amala Paul shocked everyone by posing nude for her latest film Adai. Expectations were even higher with the first look poster, the impressed Chitraunit teaser.

Released in Telugu as her titled teaser, Superb is responding. Amala Paul cut the teaser with scenes like a mother missing her daughter and giving police a compliant at the police station. Amalapal has been praised by moviegoers who have never done any heroine in the South.