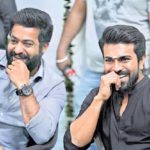 What’s the look of NTR in ‘RRR’? How is Ramcharan going to appear with mustaches?  Rajamouli has figured out the date of the NTR-Charan look in the film ‘RRR’. NTR, Ramcharan in Rajamouli’s direction is ‘RRR’. DVV Danayya is the producer. Alia Bhatt is playing alongside Ramcharan. NTR has no heroine fix.

NTR and Charan will be seen in the roles of Komarama Bhim and Alluri Sitaramaraju. The film is going to be screened in Periodical Backdrop in 1920s. The film crew is planning to release the first look on August 15. On the day of Independence, they would think that if they look like freedom fighters, it would be good. Bollywood actor Ajay Devankar and Tamil actor Maruthi is playing the lead in the film, which will be released in July next year.