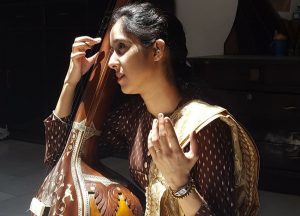 Rajvinder Kaur is a young and talented singer who has become popular with her singing performance on Zee TV’s ‘Sa Re Ga Ma Pa’ (2018).

Rajvinder Kaur began singing at a very young age and was inspired by her father and grandfather who are Gurbani singers at their local Gurudwara. After having trained almost all her life and graduating with a degree in music Rajvinder Kaur has become an accomplished classical singer who has mesmerized judges and audiences alike with her soulful performances.

Rajvinder Kaur’s talent and hard work is showcased for all to see in the wonderful singing performances she has displayed to viewers and judges on ‘Sa Re Ga Ma Pa’ in 2018.