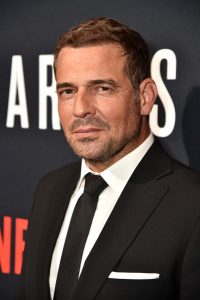 Pepe Rapazote is a Portuguese actor most popular for his several super hit roles in TV series and movies in the American entertainment industry, most renowned for portraying the dreaded South American drug-lord Chepe Santacruz Londono, in the super hit netflix series, ‘Narcos’ (2017).

After having started a career as an architect in 1993, Pepe Rapazote decided to become an actor after a few years.

After joining acting classes with Jose Boavida for a couple of years, between 1998 and 1999, Pepe Rapazote struggled to become an actor in the American TV industry initially.

Although he was offered significant roles in popular American TV soap operas, Pepe Rapazote declined them believing that these roles would make him be typecast in such roles and restrict his recognition in the Hollywood movie industry as a talented actor.

Pepe Rapazote is one of the most talented foreign actors in the American entertainment industry today. Pepe Rapazote is most popular for his iconic performance of the feared South American drug, Chepe, in ‘Narcos’ (2017) the super hit series on Netflix.