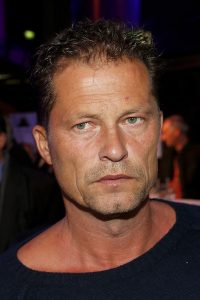 Til Schweiger is a popular German actor, who has appeared in several memorable roles in the Hollywood and German movie industries and on TV in American and Germany.

Besides being a popular actor on-screen, Til Schweiger is also a talented voice artist, movie director, movie producer as well as an accomplished film editor too and has won several prestigious awards and award nominations.

Being a successful film director and producer, Til Schweiger owns the Barefoot Films production house in Germany.

Before gaining popularity as an actor, Til Schweiger found fame as a screenwriter, film producer and film director when his movie ‘Keinohrhasen’/’Rabbit Without Ears’ (2007) went on to become the highest-grossing film from the German movie industry.

Til Schweiger initially pursued a course in German for two years with plans of being a teacher, however he found acting wonderful and decided to enroll in “Der Keller”, finally graduating in 1989. Earlier in his career, Til Schweiger appeared in several German TV series, and later ventured as a producer and director in the German movie industry before finally making his lead debut in 1991.

Thanks to his impressive multi-skills as an actor, director, producer, editor and even screenwriter, Til Schweiger’s net worth is estimated around INR 218 crores (USD 30 Million).

As for the recognition as an established actor and filmmaker, Til Schweiger is the winner of several awards and has had numerous award nominations till date as well.

The list of Til Schweiger’s award-wins begins with Til Schweiger winning the Bambi award for ‘Der bewegte Mann’ (1994), the Bambi award, once again, this time for ‘Mannerpension’ (1995), the Gydnia Film Festival’s bester Darsteller for ‘Bastard’ (1997), the 1998 Bravo Otto award for bester Schauspieler, the Golden Kamera award for bester Schauspieler for ‘Knockin’ On Heaven’s Door’ (1998), the 2003 Hessischer Kultupreis award, the Jupiter award for bester deutscher Schauspieler for ‘Where is Fred?’ (2008), the 2008 Ehren-Bravo Otto award, the Bambi award for National Film for ‘Keinohrhasen’ (2008), the Deutscher Comedypries beste Kino-Komodie award for ‘Rabbit Without Ears’ (2008), the Jupiter award for ‘Keinohrhasen/Rabbit Without Ears’ (2009), the 2X-DIVA Award for ‘Keinohrhasen’ (2009), the Deutscher Comedypreis beste Kino-Komodie award for ‘Zweiohrkuken/Rabbit Without Ears-2’ (2010), the Deutscher Comedypreis erfolgreichste deutsche Filmkomodie award for ‘Kokwaah’ (2011), the 2011 Querdenker Award and the Jupiter Awards’ bester Darsteller for ‘Kokowaah’ (2012).

Interesting Facts About Til Schweiger