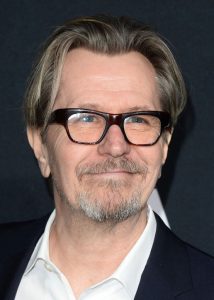 Gary Oldman is a popular and highly skilled character actor from the Hollywood movie industry. Gary Oldman is highly talented in mimicking various accents which are required for his complex characters in movies. His way of getting into the character perfectly has cast Gary Oldman in numerous anti-protagonist roles which are often borderline psychotic.

Besides being a popular Hollywood star, Gary Oldman is also one of the top actors in the American television and theater industries and also a talented singer as well. His expressive way of acting has enabled Gary Oldman to win numerous prestigious award and also numerous award nominations too.

Apart from being an actor, Gary Oldman is also a filmmaker and has at least 3 movies to his credit as a scriptwriter.

Gary Oldman is a truly talented actor as he is known to have played a different accent and his character acting skills are impressive in portraying a completely different person on-screen, which has won Gary Oldman numerous prestigious acting awards, in over 35 years as an actor in the Hollywood movie industry. Apart from having appeared in several acting roles in super hit movies, Gary Oldman has also lent his voice to popular video game and animated feature film characters too, besides being a talented singer also.

Owing to his impressive acting skills, high demand and having an experience working in the acting industry for over 35 years, Gary Oldman’s net worth today is estimated around INR 358 crores (USD 50 Million).

As for his excellent acting talent, Gary Oldman has won numerous popular acting awards and has also received numerous award nominations too.

The list of Gary Oldman’s award-wins include the Academy Award for Best Actor for his impressive role in ‘Darkest Hour’ (2018) besides having 1 Oscar nomination earlier.

Gary Oldman has won the Satellite Award for Best Actor – Motion Picture for his performance in ‘Darkest Hour’ (2018) and has had 1 Satellite Award nomination to his credit.

Gary Oldman also won the Saturn Award for Best Actor for his iconic role in ‘Bram Stoker’s Dracula’ (1993) besides having 2 Saturn Award nominations later on.