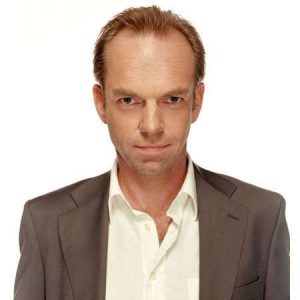 Hugo Weaving is one of the most talented and popular actors from the Hollywood movie industry, apart from being a popular stage artist as well.

Hugo Weaving initially began his career as an actor in the Australian TV industry then later rose to prominence for his role in the movie ‘Proof’ (1991).

Hugo Weaving is most recognized for playing popular sinister characters on the big screen, such as Agent Smith in the ‘Matrix’ movie franchise, Lord Elrond in the ‘Hobbit’ and ‘Lord of the Rings’ trilogy as well as Red Skull in an Avenger movie from the Marvel movie universe.

Hugo Weaving is a highly popular and talented actor in the Hollywood movie industry who is most renowned for his rich and deeply dramatic voice, along with the iconic arched eyebrows which infuse depth to his calm and often sinister manner of dialogue delivery.

Thanks to his immense success as an actor in the American movie and TV industry Hugo Weaving’s net worth today is around INR 215 crores (USD 30 Million).

As for the recognition for his impressive acting talent, Hugo Weaving has received several prestigious awards and has had numerous award nominations to his credit as well.

Later on, Hugo Weaving won the The Constellation Awards’ Best Male Performance in Science Fiction Film, TV Movie or Miniseries, for his excellent act in ‘V for Vendetta’ (2007), the Sydney Theater Award for Best Supporting Actor for his role in the popular Australian stage play ‘Uncle Vanya’ (2011), the Helen Hayes Award for Best Supporting Performer in a Non-Resident Production for his impressive acting in the stage play ‘Uncle Vanya’ (2012) and won the Helpmann Award for Best Male Actor in a Play for his excellent stage acting in ‘The Irresistible Rise of Arturo Ui’ (2018) most recently.

Besides having won these numerous prestigious acting awards, Hugo Weaving has also had around 20 award nominations till date too.