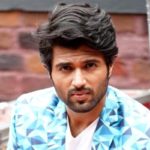 Vijay Devarakonda is busy with a series of tollywood movies. Vijay is already ready for the release of Dear comrade . Currently, Vijay is playing a romantic entertainer directed by Kranthi Madhav along with promotional activities. Tamil film director Anand is going to play the drama for this film.

One of the latest news about Kranti Madhav’s upcoming film is going viral. Vijay will be seen as a writer in the movie. The film seems to be making a different concept with the hero himself in the stories he wrote. The film is being produced by Keys Rama Rao and has three heroines opposite Vijay.