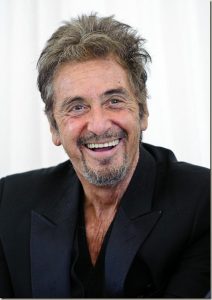 Al Pacino is a top veteran actor from the Hollywood movie industry who has been a part of the industry for over 50 years now.

Apart from being a popular, multiple award-winning actor, Al Pacino is also a filmmaker in his own rights. Al Pacino is most renowned for his impressive method acting, wherein he immerses himself in the movie character to an extreme length by studying their background and history.

Besides working in the Hollywood film industry, Al Pacino has also been a major part in theater as well.

Al Pacino is widely recognized for his distinct throaty voice and often his volcanic tirade in his movies.

Al Pacino is one of the most talented veteran actors from the Hollywood film industry who is most distinct for his impressive method acting skills and peculiar dialogue delivery which makes it a treat to watch his movies.

Al Pacino’s father, Salvatore ‘Sal’ Pacino was an insurance salesman by profession while Al Pacino’s mother was Rose Pacino. Although Al Pacino did not have any brothers, Al Pacino’s elder sisters include Josette Pacino, a teacher by profession and Paula Pacino and Roberta Pacino (twins). Al Pacino’s younger sister is Desiree Pacino. Being a popular actor Al Pacino was linked with several top celebrities of the time. Al Pacino’s ex-girlfriends include Hollywood actresses Beverley D’Angelo, Diane Keaton, Lucila Sola and Penelope Ann Miller and also his acting coach Jan Tarrant. Although Al Pacino has never been married, Al Pacino has a daughter, Julie Pacino, from his relationship with Jan Tarrant. Al Pacino also has a daughter, Olivia Rose D’Angelo, and a son, Anton James D’Angelo, from his relationship with Beverley D’Angelo.

Having been an integral part of the Hollywood movie industry for almost 50 years, Al Pacino’s net worth is estimated to be around INR 1206 crores (USD 165 Million).

As for his success as a talented actor, Al Pacino is the recipient of numerous prestigious acting awards and honors besides having had immense nominations for awards as well.

Al Pacino is the winner of the Academy Award for Best Actor for his impressive acting in ‘Scent of a Woman’ (1993). Besides having won an Academy Award, Al Pacino has also had 7 Oscar nominations to his credit as well.

Having won these numerous awards, Al Pacino holds the distinction of having won the “Triple Crown of Acting” as he has won an Oscar, an Emmy and a Tony award also.